Yesterday night, our amazing Fred Chasen jumped the gun and pushed the 0.4.0 to npm, making it the base version for any of you who use npm without version control, or simply call from the unpkg cdn (or any other cdn).

That means that if you opened your previous file without knowing what would happen, you must have had a bit of a scary moment. Don’t worry too much, the breaking changes were not about how paged.js works, but more on how Paged.js previews things on screen.

I want to go back to have a preview on screen!

Yep! Absolutely, it’s (one of) the great features of Paged.js, and we have a couple of solutions for you.

We explained it last time (you can read the post here, but we moved forward to follow the standards for the media queries. So, from now on, pagedjs will ignore any rule that should not apply to a media screen. @media screen being the most useful example.

The most standard change, for all of you, is the preview on screen: if you want to use the interface.css we’re making, you can simply update and use the https://gitlab.coko.foundation/pagedjs/interface-polyfill/blob/master/interface.css for version 0.4.

Note that if you have some css for the screen that you want to force pass to the browser (for example to allow an UI around paged.js) then you can use the pagedjs-ignore property in the html <link rel="stylesheet" type="text/css" href="screen.css" pagedjs-ignore> or in the css : @media screen, pagedjs-ignore { .pagedjs_pages {margin-top: 20em} }

Again, the previous post will tell you all about it. The good thing is that the styles for the screen and the paper will stop hurting each other.

And features you’ll get! Here are the release notes from the merge requests, explained.

You can now have multiple nested named pages:

Until now, you could only have one level of named page. This will fix that by allowing nested named pages. For example, if this is your html

and this is your css

then the Preamble will be on its own page!

An image is better than a long talk right? So this is what we support. 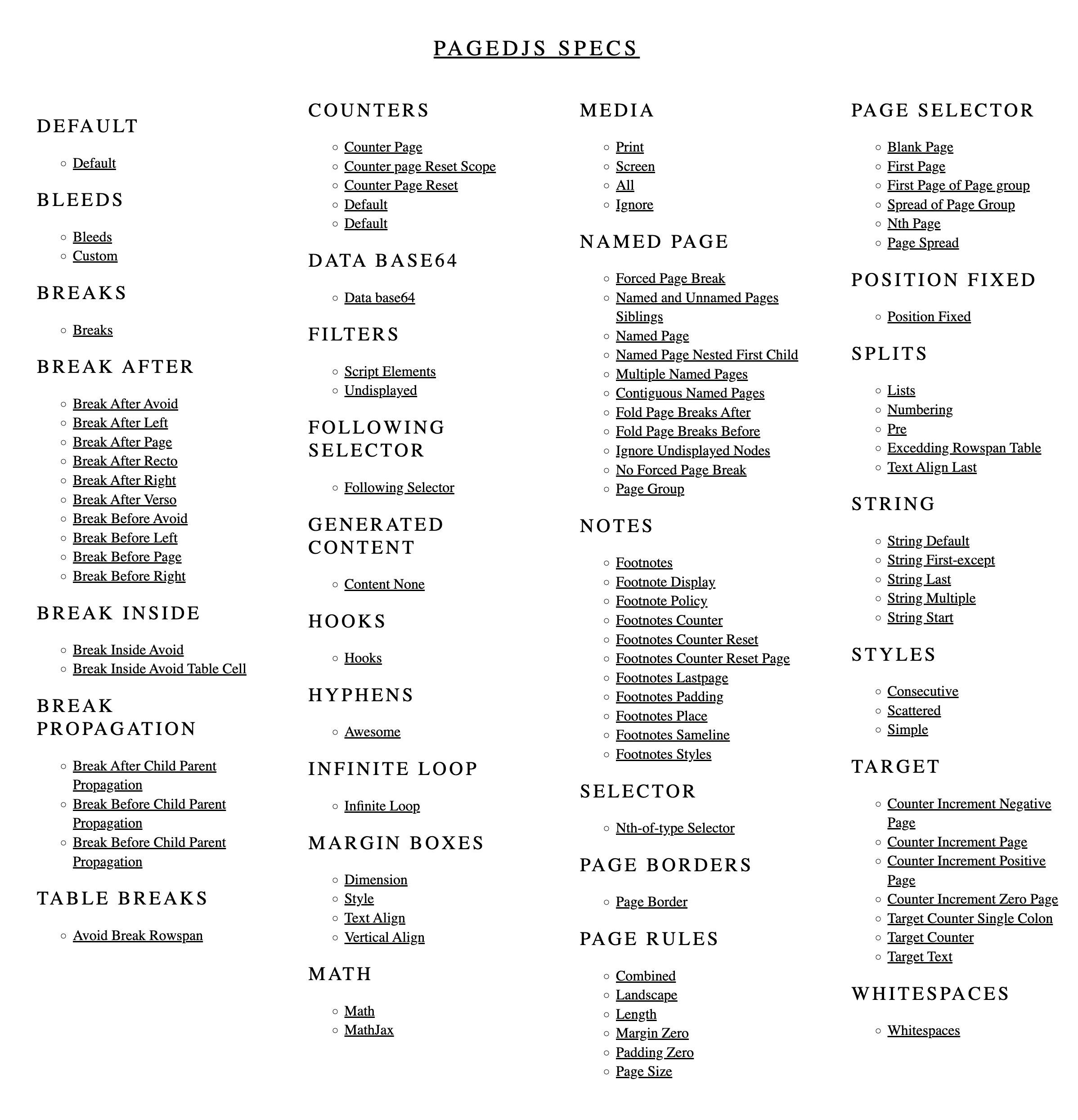 Ok, so no, the image is not always better, especially as it’s an inaccessible way to show information. So if you want to see what we support, you may want to go there too: https://pagedjs.org/documentation/cheatsheet/ It’s needs a bit of an update so feel free to open an issue and help us writing down the most accurate feature list we can have. Please be in touch at https://mattermost.coko.foundation

Paged.js used to cut table at the first block of text overlapped the page height, and this caused a column shifting beteen pages. While this was very fun to look at, it was a real pain for people who worked with tables. So this is now a bit better.

Fred also fixed an issue where multiline content would break tables after a page break.

Tables are still problematic when they get long and overly complex but we’ll get there eventually.

There is a new hook in town.

Say hello to finalizePage. This hook runs just before the page is considered rendered, after page layout is completed. When paged.js is done with the afterPageLayout if run finalizePage. This allow us to manage any changes that occurred in layout or when generated content was added.

Looping is gone (but being a loop, it may be back)

From now on, Paged.js 0.4 will gracefully stop when that happens.

One but not least

You can now reuse attributes from your element as information for your running headers:

will allows you to reuse the attribute as part of your generated content:

this will put in the margin bottom of the page the word total, since it’s the value of the data-fun attribute

Better, you can now have multiple string-set, if they are separated with commas:

We’ll be back soon with some nice example of Paged.js!